Designing for Play: Children in the Publ...

Re: Think Project Partners with Municipality for Communal Composting in Greece

The Alexandria Co-Working Network: Libraries as Spaces for Community Innovation

Re: Think Project Partners with Municipality for Communa...

“Mobility” is one of the 14 quality of life indicators that Detroit, Michigan will use as a benchmark of success for their long term regional and urban planning. In December 2012, we begged the question: Will the Motor City (Detroit, Michigan) ever relinquish its auto–centric ideals for the benefits of pedal power? What about buses 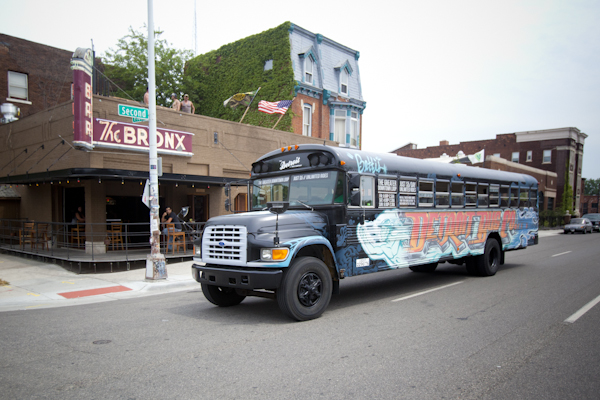 “Mobility” is one of the 14 quality of life indicators that Detroit, Michigan will use as a benchmark of success for their long term regional and urban planning. In December 2012, we begged the question: Will the Motor City (Detroit, Michigan) ever relinquish its auto-centric ideals for the benefits of pedal power? What about buses as an alternative transportation? Or light rail? The fact is, the Motor City is the only major city without a Regional Transportation Authority. And the car remains a center place to living, working, and playing in metro-Detroit.

The debate is whether we should invest public dollars in creating a regional transit system or if we should leave the matter in the hands of social-media savvy, fiscally-smart entrepreneurs. Detroit does have a bit of a rap-sheet when it comes to mis-management, then again, a private firm would need time to obtain a size-able fleet. Both sides agree that they should build the spines along Detroit’s historically significant routes, namely: Woodward, Gratiot, and Michigan Avenue. Who is better equipped to tackle these issues of efficiency, marketing, education, and operation?

Presently, the metro-area has two separate and poorly-coordinated bus systems; the Detroit Department of Transportation (DDOT) and Suburban Mobility Authority for Regional Transportation (SMART). Riders are unsatisfied with the current organization. In addition to regular bus delays, the routes often fail to serve the population of users. Plus, many suburban auto-owners would much rather contend with the known variables of traffic congestion on Interstate 75, than navigate bus schedules and fees.

DDOT and the Suburban Mobility Authority for Regional SMART were recently awarded a State of Good Repair grant for $30 million dollars. The money will be used to purchase new buses, update facilities, and improve on-board security.  But is this unified front really going to change the underlying issues related to race, economics, and our cultural-construct of privilege?

After the bottom fell-out of the M-1 Woodward Light Rail project, Andy Didorosi, of the Detroit Bus Co. (DBC), set out to meet the needs of riders along the Woodward corridor. No more static routes! For just $5 per ride, DBC shuttle riders to their desired Detroit destination, including: Woodbridge, Midtown, Eastern Market, Corktown, Lafayette Park, and Downtown. Didorosi has also set up a “We Ride” program; for every ticket purchased, DBC provides a free-ride for a Detroiter in need.

Some people depend on an improved regional transit system and many more are supportive of the idea. Maybe this is not a debate after-all, but instead an opportunity to collaborate.

As urban planners and community leaders how do we incorporate private ventures into our long term planning for mobility and access?

Credits: Images and data linked to the sources.

Alexandria graduated from The University of Michigan with a B.S. in Architecture. In order to gain an authentic understanding of the urban context through the lens of education, she became a Denver, Colorado corps member with Teach for America, teach...

Designing for Play: Children in the Public Realm

Are the Urban Transformation Projects in Turkey Successful?

A Walk in the Park: The Legacy of the 1903 Olmsted Plan