Crowdsourcing the Evolution of an Industrial Neighborhoo...

Are Tech Companies the Cure for San Francisco's Homeless “Epidemic?"

Students for CNU Session Summary: The Congress for the New Urbansim’s CNU21

Belfast Culture Night: A Benefit or a Burden?

Are Tech Companies the Cure for San Francisco's Homeless...

Crowdsourcing the Evolution of an Industrial Neighborhood: The Granary District’s Journey at The Congress for the New Urbanism’s CNU21

James Alfandre, Kentlands Initiative James Alfandre, Executive Director at the Kentlands Initiative, opened the session by defining crowdsourcing. He thinks of crowdsourcing as an “open call to an undefined group of people.” It’s essentially Wikipedia’s open source model applied to urban revitalization and development. Alfandre said that there are two major steps to creating the

James Alfandre, Executive Director at the Kentlands Initiative, opened the session by defining crowdsourcing. He thinks of crowdsourcing as an “open call to an undefined group of people.” It’s essentially Wikipedia’s open source model applied to urban revitalization and development.

The Granary District is a 99-acre mixed use transit-oriented development, or TOD. It was a mixture of land uses ranging from single family housing to heavy industrial in the late 1800s. In 1999, the Granary District started to become the hip area Salt Lake City cherishes today. The gentrification efforts are particularly interesting to those in the planning and community development fields as the district has major highways running on the West and South boundaries and major arterials along the North and East boundaries. Three transit lines run through the district. “It’s gritty, diverse, and grounded,” said Alfandre.

This online presence was followed up shortly with face-to-face collaboration as well. Various activities in the neighborhood encouraged neighborly interaction and planted the seed to grow a sense of community within the district. The first major neighborhood event was a block party in the old pickle factory. Alfandre said that it was the first time residents referred to the Granary District as a neighborhood- their neighborhood. The block party was funded mostly through Kickstarter. 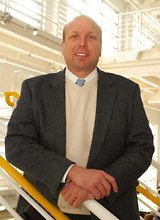 The neighborhood needed affordable housing to bring in the mix of incomes and backgrounds, cultivating a rich community. Thankfully, dividing larger parcels into small lots allowed an escape from cutting-edge-project-crippling parking standards. Affordable, single-family homes can be created from used shipping containers. At 1,600sqft, a family can purchase their own home for just $5,000. All they need to do after purchasing the home is choose a small, affordable lot- exactly what the district is aiming to provide.

One block design concept the district and the Kentlands Initiative is looking into is a mix of scales: Tall buildings would serve as the “crust” on the outer edge of the block, and smaller buildings would be nestled within.

Watkins introduced the concept behind Granary Row as well. Salt Lake City’s core is nothing but wide right of ways and super-sized blocks. A common method of breaking down the oversized downtown is to divide the block in half with a modest street. The Kentlands Initiative has chosen to turn this custom on its face. Instead of putting a street in the middle of a block, they’ve put a block in the middle of the street.

He started by saying that a crowdsourced approach is not to replace a design committee, but should be a tool in the design process, an information gathering tool. It’s simply an opportunity to reach the future user of the project.

Blalock has personally invested in the neighborhood by purchasing a parcel on Granary Row. He wishes to redevelop it into three buildings around a common green space with a wrap-around parking lot. The parcel will hold an office for his firm, rented out artisan space for the neighborhood’s creatives, and live/work units that will eventually be turned into for-sale properties. The sort of people he’d like to attract are outdoorsy young people who are tech-oriented: white collar professionals by day and artisans by night.

He is utilizing crowdsourcing to find a developer who would be willing to take on and build such a fresh idea.

Alfandre took the stage once more. He explained that crowdsourcing is also a way to minimize risk and increase support for a development or project. No longer must we build something and pray the public will like it- just ask your potential customers what they want.

He said that in addition to having small parcels that don’t legally require any off-street parking, he doesn’t believe parking will be an issue as there are 140 on-street parking spaces in the Granary District.

One problem the neighborhood is kicking around is the lack of covered parking. Due to Salt Lake City’s intense summers and winters, covered parking is in high demand. Thanks to crowdsourcing, the district may end up with parking spaces at the ground level, with raised affordable housing on top. Solar panels would be on the roofs of these homes.

Luke Garrott, a Council Member on the Salt Lake City Council, said that the City’s perspective on the project is overall positive. He said that while the city usually looks for traditional redevelopment means through corporate headquarters and the like, the city seems to be willing to work with entrepreneurs. The “bureaucratic machinery” (i.e. decision makers) is not out of reach in a small city like Salt Lake.

Some of the City’s planning division attended the initial charette discussing the district’s future. Garrott said that some left-wing decision makers wish to simply make the charette handbook the Salt Lake City’s plan.

He argued that digital outreach through Facebook and the like only touches those who are already engaged in the planning process because people must search specifically to find your page or hashtag. It doesn’t allow much room for uninvolved people to come stumbling across the project. He said that he’s leery of “legitimate participation” through these means. He asked rhetorically, “What’s going to count as ‘community vision’?”

Aascot Holt is an undergraduate at Eastern Washington University, pursuing a major in Urban and Regional Planning and a minor in Geography. She will graduate in the spring of 2013. She is from Stevenson, WA and currently lives in Spokane, WA in a bri...

Transforming Miami: One Ride at a Time

Are Tech Companies the Cure for San Francisco's Homeless “Epidemic?"

Students for CNU Session Summary: The Congress for the New Urbansim’s CNU21

Belfast Culture Night: A Benefit or a Burden?

Are Tech Companies the Cure for San Francisco's Homeless...